multiSIM developed the D-SIM Desktop Simulator Interface as a standard solution to run, operate and link distributed simulations in a network.

One Desktop can act as a main node in a network to which any simulator or extra modules can be added. Simulations and scenarios can then be joined, controlled or monitored by trainees and instructors from any module in the network. The D-SIM Desktop Simulator Interface is mobile and can be easily reconfigured for, and linked to, different simulations, since it needs only two external connections: power and an ethernet connection.

Each Desktop consists of 2 high-end workstations, a high-resolution ultrawide panel, and a touch screen. VR headsets can be connected to either workstation. D-SIM and D-WORLD are pre-installed.

The Desktop Simulator Interfaces run the D-SIM software and the D-WORLD render engine and have multiple uses: 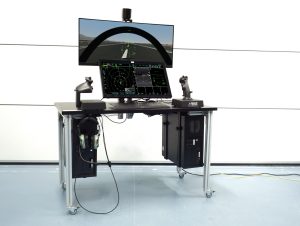 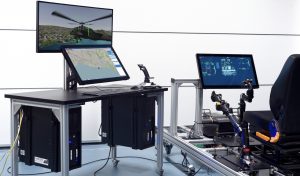 One solution for simulation

multiSIM delivers numerous networked training solutions in which the Desktop Simulator Interface is used to run, operate and link simulators, including platforms such as: AH64 Apache, CH47 Chinook, F-16, F-35 and Fennek, Boxer and CV90 land vehicles. Link your simulator to the D-SIM software and D-WORLD render engine and it is automatically part of a potentially very large networked training simulation. 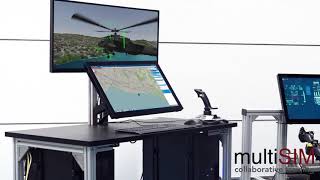